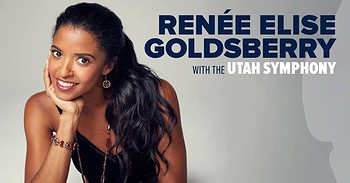 Park City‘s Deer Valley Music Festival, the summer home of the Utah Symphony, is known for attracting world-class guest artists for unforgettable concerts and on July 20, the Snow Park Outdoor Amphitheater played host to Renee Elise Goldsberry with the Utah Symphony. This Tony-award-winning actress is known for her Broadway roles in such modern classics as RENT and The Lion King, but also originated the role of Angelica Schuyler in Lin-Manuel Miranda‘s Pulitzer-winning musical Hamilton. As a musical theater enthusiast who can recite most of Hamilton, I was thrilled to attend this single concert by one of my favorite performers.

The concert itself was under the baton of guest conductor Enrico Lopez-Yañez, whom Goldsberry repeatedly hailed as a good friend and phenomenal conductor. The orchestra opened the night with an overture that recalled old Broadway with sweeping melodic lines and clever orchestration, While the title was not announced, it set the stage not only for the Symphony’s performance, but for what the audience could expect from Lopez-Yañez. This maestro conducts as if assuming different roles in a play while ensuring that the orchestra never upstages the guest artist.

The orchestra itself collaborated with a small band that included an electric guitarist, a pianist, and several percussionists. In some numbers, Symphony artists were more prominently featured, but it was remarkable to hear them take a supporting role that was both skillful and unobtrusive.

Goldsberry’s opening number of “On a Clear Day, You Can See Forever” by Burton Lane and Alan Jay Lerner was an interesting choice for a Broadway actress known for edgy roles, straddling a line between Barbara Streisand-style crooning and bold soul music. Every song in this concert showcased powerhouse vocals tempered by emotional connection and fused styles from Motown to gospel choir.

Goldsberry frequently paused between songs to share elements of her personal journey. By way of introduction, she informed the audience that one of her first performances after Hamilton was at Utah’s own Brigham Young University. “It lit my way forward and I found my purpose at BYU. We are here to fill the air around us with music that stirs the soul to love.”

The remainder of the program made that intention clear. While Goldsberry’s energy kept her dancing with wild abandon during guitar solos and included scatting reminiscent of Ella Fitzgerald, all of her selections were uplifting in message and drew attention to what unites all of humanity. Paying tribute to the work of Reverend Martin Luther King, Jr., she hushed the crowd with her reverent “Up to the Mountain” by Patty Griffith and soon after united with her three backup singers for a stirring rendition of “We Who Believe Cannot Rest Until It Comes (Ella’s Song)” by Dr. Bernice Johnson. Much of the concert’s first half featured gospel music, but ended on a show-stopping “Bridge Over Troubled Waters” by Simon and Garfunkel.

The second half allowed Goldsberry to explore songs from the Great White Way. After starting out with the sassy “Beat Out Dat Rhythm on a Drum” from Georges Bizet and Oscar Hammerstein II‘s 1943 Carmen Jones, she kicked off a showcase of the Broadway hits that she is known for. She then shifted tone to an empowering and resilient rendition of “Shadowland” from her first major stage role in The Lion King (Elton John, Julie Taymor, Hans Zimmer, Mark Mancina, Lebo M., Jay Rifkin, Tim Rice). She finished the concert with selections from musicals that undoubtedly attracted many of the audience members to this event in the first place. Encouraging anyone who could keep up to sing along, she performed “Satisfied” and “The Schuyler Sisters” from Hamilton, in which she was fierce and impassioned. A fusion of “Without You” and “Another Day” from RENT by Jonathan Larson attuned the audience to a character yearning for and encouraging meaningful love. The most impressive number, however, was heralded by the solo piano arpeggio that begins “It’s Quiet Uptown,” a wrenching and lovely song about loss and connection from Hamilton. As a final number, she took Richard Rodgers and Oscar Hammerstein II‘s “You’ll Never Walk Alone” from Carousel and set it to such a modern and inspiring arrangement that the audience was on its feet and dancing.

This spectacular was, unfortunately, for one night only, but the Deer Valley Music Festival is only halfway through its season and such stunning performances and collaborations are still to come. Anyone who would like to have their soul stirred to love music should take the next opportunity to hear anything from Bach to Broadway and back.