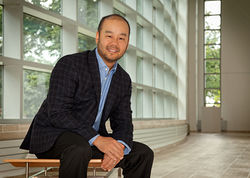 After completing their summer concert series at the end of July, Symphoria’s musicians took a deserved intermission. When they return to the stage this weekend, new music director Lawrence Loh will assume the podium to lead the orchestra into its fourth season.

Symphoria is one of the only musician-governed orchestras in the United States. After the Syracuse Symphony Orchestra disbanded in the fall of 2011, 47 former members formed Symphoria, a smaller, more flexible organization, in 2012.

Loh, 45, a former resident conductor of the Pittsburgh Symphony Orchestra, was appointed the first-ever artistic director of Symphoria by the musicians and board of directors in 2014. Originally from California, the Yale graduate has conducted professional orchestras across the country, including the National Symphony Orchestra and the Dallas Symphony.

Catherine Underhill, Symphoria’s managing director, said that everyone is excited to bring Loh on board. “We’re looking forward to the public getting to know him in different venues and genres,” she said.

The search for an artistic director began during Symphoria’s first season. After Loh’s guest appearances with the orchestra in 2013, board members and musicians unanimously agreed that he was the man for the job, Underhill said.

John Garland, a Symphoria musician, said that Loh is bringing a “great enthusiasm” to the new season. “Playing in an orchestra can feel like working on an assembly line, so Loh is the perfect fit,” Garland said. “We’re really thrilled to have him.”

As a musician-owned and -governed organization, Symphoria is on the cutting edge of the business model for American orchestras. Underhill said that the relationship between the board of directors and the artistic director will be more collaborative than is the case with other U.S. orchestras.

Loh said he is looking forward to working with the orchestra members. “The musicians have a very personal obvious stake in the organization’s success. And so do I,” he said. “We are all responsible for Symphoria. Every one of us.”

This collaborative approach will extend further than just Symphoria. Loh said that he will be searching for ways to partner with other arts organizations in the city. “We all coexist, and we all have the same mission: trying to work to enrich lives through great art.”

Linda Hartsock, director of the Connective Corridor, said that she is eager to work with Loh and Symphoria and looking for ways to “bring the corridor alive with music.” She said that bringing on Loh is a “bold move” that will help reinvigorate and reinvent Symphoria.

“I think it’ll be exciting not just for Symphoria, but for Syracuse,” Hartsock said. “The word that’s used most often to describe him is electrifying.”

Loh said he will be exploring new ways to unite Symphoria with the public. He will be traveling with the musicians to different venues around the city to perform different kinds of concerts. Between the Masterworks, Pops, Casual and Kids concert series, Loh hopes to provide music to as many listeners as possible.