Back to List
Acclaim
The Guitar Comes Out of the Shadows with the W.Va. Symphony 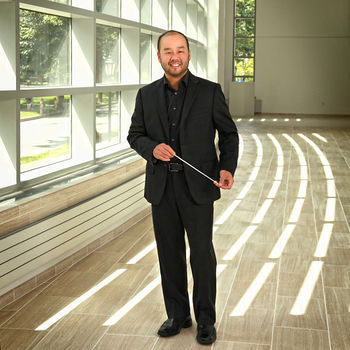 When it comes to concertos, classical guitar soloists have labored in the shadows when compared to other instruments, particularly the piano, violin and cello. The repertoire is much smaller and that repertoire is dominated by pieces composed by lesser-known figures.

The reason might be that writing for the guitar is infernally difficult. It scares a lot of composers away.

But, in concertos, the guitar has an advantage that only the piano shares. It can take the whole of the musical fabric that the orchestra is playing -- melody, harmony, rhythm, texture – and reproduce it.

When the soloist doing this is masterful, as guitarist Jason Vieaux is, you get exciting performances.

He joined guest conductor Lawrence Loh and the West Virginia Symphony for concertos by Rodrigo and Sierra, Saturday night at the Clay Center’s Maier Performance Hall.

Rodrigo’s Concierto de Aranjuez is the famous guitar concerto. Vieaux had the full measure of the first movement playing robustly on the dancing rhythms that open the piece while neatly flying through the scales that provide accompaniment to the orchestra’s commentary on his initial essays.

Rodrigo’s conception of the second movement was pure, simple genius. The guitar launches into sweet chords, an English horn plays a low, sad melody before the guitar picks it up and adds elaboration to it. Little variations float from soloist to the orchestra and back before the guitar gathers all the ideas into an elaborate, hushed cadenza.

Vieaux played this slow, gorgeous music spectacularly. His tone had a firm dark core. As the music moved into faster rhythms, he had a glorious rumble in the bass range. The final bars, where quiet returned, were translucently lovely. Alex Winter was the expressive English horn soloist.

The final motored along with crisp clarity and bracing colors as Vieaux worked in alternating phrases. He played the whole of the music which was then spread through the whole orchestra while he played rapid commentary on the orchestra’s response.

Guest conductor Lawrence Loh, the fifth candidate to fill the orchestra’s music director’s position, kept everything in the orchestra in a fine balance with Vieaux’s quiet instrument while the ensemble played deftly.

Modern composers know how to seize an opportunity. Roberto Sierra’s “Folias “ Concerto (2002) uses the instrumentation of Rodrigo’s concerto plus one percussionist. It is relatively short, making it an ideal companion piece to the Rodrigo, which is also rather brief.

The concerto is based on the famous 17th-century melody “La Folia” (Madness). Vieaux played with fiery vigor and technical brilliance. Sierra created chords that used the guitar’s lowest notes with some extremely high sounds. These had a distinctive bite in Vieaux’s hands, indicative of his flair for style and substance. Except for one little bit of rhythmic imprecision in the middle, the orchestra sounded elegant, robust and spot-on.

Loh began with a gripping interpretation of Samuel Barber’s First Essay for Orchestra. The opening string choir was precisely marked on the beats and the texture shaped artfully. The following passage for the brass was richly sonorous and full of subtle shadings of tone and volume. The fast section capered with bouncing rhythms flying around the orchestra driven by Victoria Fatu’s rumbling piano lines and Scott Christian’s heroic timpani. The quiet conclusion was witty and mysterious.

Loh gave Tchaikovsky’s Symphony No. 4 in F Minor a good bit of bite. The opening movement was frenetic at times, a nice touch in such rhythmically agitated music. The opening fanfares where not precisely coordinated, with entrances in the brass staggered slightly. The complex counterpoints that drive the central section had sweep and distinct details.

Loh did fine job with the slow movement, letting the many solos in the winds emerge with expressive freedom. The scherzo, with its pizzicato strings and interrupting embellishments of woodwinds, was buoyant and luminous. The finale flew by with muscular vigor.

The audience, already seemingly enthralled with Vieaux’s performance, met the Tchaikovsky with even more acclaim, drawing an extended ovation for Loh and the orchestra.