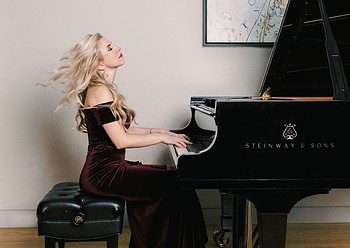 Flowers at curtain call are the usual gesture of appreciation. A round of Vodka shots? Unique.

Paremski, Russian born and United States trained, has earned critical acclaim for delivering consistently electrifying performances. She more than met the challenges of Rachmaninoff (1873-1943) who was himself a piano virtuoso and who composed concertos designed to exhibit his own colossal proficiency.

Technical skill and artistry were seamlessly united in Paremski’s highly visual performances. Long, blonde hair flowing, body rocking, arms flying, she and the music became one, whether she was playing a stunning cadenza, interacting with Symphoria, or listening to the orchestral passages.

Loh, precise as always, added to the visual aspects of the concerts, conducting with more expansive gestures than usual as he interpreted the score, encouraged the musicians—who brilliantly played two challenging programs in two nights—and kept everyone together.

The Rachmaninoff festival, an overview of the 20th century musical giant’s development over 50 years of his life, began with Loh conducting the composer’s Scherzo in D minor, written when he was 14. The sprightly study, with echoes of Mendelssohn’s “A Midsummer Night’s Dream,” provided a charming warm up for the passion that would follow Friday night.

The range of Paremski’s artistic skill was immediately evident as she played the Piano Concerto No. 1, op. 1, in F-sharp minor, composed when Rachmaninoff was still a teenager. After tender introductory passages, she thrilled the crowd with her passionate rendering of the first movement cadenza. She garnered spontaneous applause after the Vivace movement, even though it’s not customary for an audience to react between movements. In the second movement, Andante, she presented an expressive, lyrical cadenza, then, in the third movement, Allegro vivace, she delighted with the innovative rhythms of the young composer.

After intermission, came Rachmaninoff’s Concerto No. 3, op. 30, D minor, which he called “an elephant of a concerto.” After a plaintive introduction, the huge first movement proceeds to a lengthy cadenza which Paremski owned. Dashingly, brashly, she surged through a cascade of notes, all while projecting meticulous technique.

By the final movement, listeners were already eager to respond, restraining the impulse to applaud. Excitement continued to build through Paremski’s vibrant performance of complex passages, and cheers broke out even before her hands had left the keyboard or Loh’s baton had completely dropped to his side. Loh and Paremski were called back on stage several times. At length, Paremski walked toward the piano and sat, as if to prepare for an encore (a seemingly impossible task after the physical performance she had just completed).

The crowd quieted, and the virtuoso suddenly turned trickster.

“To hear more,” she said, “come back tomorrow.”

Saturday’s opening piece was the melancholy “Vocalise,” a song without words. Symphoria played the composer’s own orchestration of the piece and, like Friday’s opener, it was a tender beginning to a night of passion.

In an aquamarine velvet off-the-shoulder gown (identical to the garnet one she had worn Friday) Paremski entered to anticipatory applause. Loh readied the musicians, and the playful Allegro vivace movement of Concerto No. 4, op. 40, in G minor was under way.

Paremski had not yet played this jazz-influenced 1926 culmination of Rachmaninoff’s concertos when she made a commitment last spring to perform all four. Having since learned this work, the only one composed in America, she shone. The sweetness of her brief solo in the second movement and the development of the melodic motif culminating in waves of music leading into the full-orchestral-color of the Allegro vivace were brilliant.

The festival—or marathon—ended with the pianist’s favorite of the cycle, No. 2, op. 18, in C minor. She played alone on the opening church-bell-like chords of the work that Rachmaninoff composed on the cusp of the 20th century, a recovery from his depressed state after critics panned his first concerto.

As the restrained solo introduction moved into an all-out cyclone of sound, Symphoria left no doubt about its status as a premier regional orchestra.

Movement II, Adagio sostenuto, had listeners nodding in that a-ha moment of recognition for the haunting melody that is most familiar from the 1945 movie, “Brief Encounter.” Paremski missed no nuance of emotion in her styling, and she demonstrated virtuosity in the grueling cadenza.

When the last movement, Allegro scherzando, arrived, Paremski became a human avalanche, careening at break-neck speed toward the finale. Those last notes were met with an immediate standing ovation, which was sustained for a full five minutes as she and Loh joined fists and raised their arms in a triumphant salute. They acknowledged the musicians, section by section, and exited the stage several times only to be called back for yet one more bow.

Then, just when the usual gesture would have been a presentation of long-stemmed red roses, out came a celebratory tray of shot glasses and a bottle of Russian vodka. With the strong hands that had just completed a rare artistic accomplishment, Paremski raised the bottle and drank before filling glasses for nearby musicians.