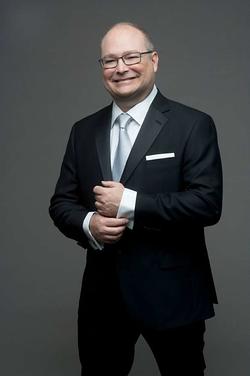 The San Antonio Symphony redefined the “pops” in its Pops Series on Friday night with an unorthodox presentation of the 1812 Overture.

The Tchaikovsky overture is known for cannon shots at the end, and the San Antonio Symphony famously has employed Fort Sam Houston howitzers outdoors in past years.
But modern, concussive Army cannons are not feasible inside the Tobin Center for the Performing Arts.

The solution? Giving the 1,000 people in the audience paper bags to pop on cues from guest conductor Stuart Chafetz.
Did it work? Mostly. Chafetz divided the audience members into three sections and managed nine “cannon shots” for the thrilling finale. It probably was more fun than anything else.

The “Armed Forces Salute” allowed members and veterans of the various military branches to stand and be recognized. The Air Force, of course, was best represented in the audience.
The mood lightened with Earth, Wind & Fire’s “September” and Steely Dan’s “Peg,” both assisted by a rhythm section of electric guitars and a trap set.

A version of “America the Beautiful” was lustrous.
Chafetz kept the concert rolling with his happy, enthusiastic banter, putting the audience in the mood for the numerous clap-along pieces.

The concert-ending piece, Sousa’s “Stars and Stripes Forever” was rousing, with the piccolo players adding their brightness and the brass section standing, to round out the evening’s celebration of America.