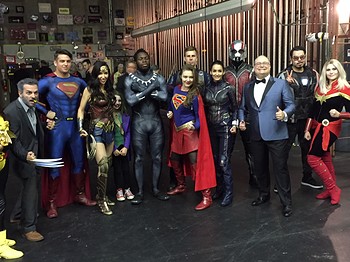 The Fresno Philharmonic got the season off to a rousing and crowd-pleasing start Saturday night with a pops offering titled “Superhero Soundtrack.” Here are 5 Things I enjoyed about the concert:

1. The trumpet section. After all, what self-respecting superhero theme wouldn’t highlight the brass? While French horns often get paired with sweeping scenic vistas and gorgeous cinematography in your average garden-variety epic, trumpets are the stars in superhero-flick soundtracks. From soloist Nathan Sobieralski to the encore “Superman” theme, the high brass soared.

2. The conductor. Stuart Chafetz has his superhero shtick down pat. Gregarious and goofy-jolly on the podium, including a couple of butt wiggles and an approximation of a man on horseback in the Gallop from Rossini’s “William Tell,” he reminded me of a cross between a retro lounge singer and the Mayor of Whoville. (And, yes, he shouted “Hi Ho Silver!”) What I liked most is that he reached out to orchestra first-timers in the audience and made them feel welcome. Soundtracks can be a gateway to classical music. (The Rossini was, by the way, one of my favorite pieces of the evening: crisp, clean and valiant, with the strings giving the trumpets a run for the title of MVP.) Overall, the orchestra offered a bright and accomplished sound.

3. “The Rocketeer.” I’m not a superhero movie expert, so I told myself before going into this concert that I’d find a new favorite movie score. That would have to be James Horner’s music for “The Rocketeer,” which to me felt heroic, melancholy, exciting and a little complicated. (And wouldn’t that pretty much describe any superhero?)

4. The Love Theme from “Superman.” It was like a step back in time. John Williams’ theme is gorgeous, from the initial oboe solo to the full and masterful cinematic sweep of the finale. All these years later, I can still myself watching the movie for the first time.

5. Hawkgirl. There was a nice group of superheroes in the lobby before the concert began, and the woman who dressed up as Hawkgirl was my favorite. Actually, given that I wouldn’t be able to even identify most superheroes besides Superman, I asked a “superfamily” of three I know well that went to the concert (and who between them, incidentally, have accumulated an almost frightening amount of detailed knowledge about the ways and means of the superheroes, right down to their vaccination records, I suspect) to be my panel of “judges” for the evening. And they picked the winner. So, congratulations, woman who flies like a hawk. May you soar with as much scope and grandeur as a John Williams score.