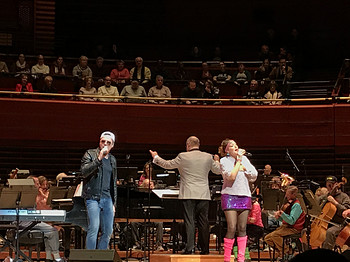 It’s not very often that I come home and immediately write about what I just saw. Usually I sleep on it, gather my thoughts and a few cups of coffee, and then say what I have to say. Totally not true this time…dude.

Listen, it’s cold outside. The best thing for you to do this weekend is head to the Kimmel Center and see the Philadelphia POPS- currently in its 40th season- perform an all ’80s tribute show. You have two more chances to experience this rad/tubular/(insert other ’80s jargon here) concert. So don’t miss out.

Fans of the POPS orchestra may remember guest conductor (and total rock star) Stuart Chafetz from 2017’s The Music of Elton John themed performances. He’s back to lead the POPS with this super awesome tribute to a pretty great decade…and he encouraged the audience to sing and dance along. We did. We definitely did.

Highlights included an ’80s movie melody (think Ghostbusters, Chariots of Fire), “Smooth Criminal” with a standing ovation for 1st violinist Michael Ludwig, Heart’s “Alone” with a sea of cell phone “lighters”, Rush featuring the rhythm section, and some Billy Joel to highlight the strings. The POPS also did “And We Danced” by The Hooters, of course, as they are a Philly band.

What’s not to love about the ’80s? And with the Philly POPS- the largest stand-alone pops orchestra in the United States- to boot. If you love George Michael, Phil Collins, Cher, Rush, Michael Jackson, Kool and the Gang, Tommy Tutone (with an inflatable cell phone), and so many more from this decade, go see the POPS this weekend.

Seeing a POPS show is unlike anything you will ever experience. Ever. Each show has a different theme and this one will take you back to a time of big hair (and hair bands!), leg warmers, epic love ballads, shoulder pads, cassette tapes…I could go on. But I won’t because I’m totally tired and completely blown away by what I saw tonight. Go-Go to the Philly POPS website now and get some tickets to see this performance for yourself.