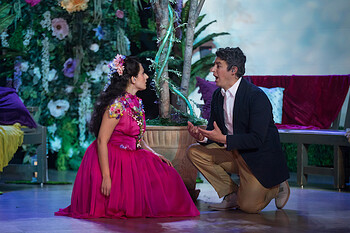 There is much to be said for taking opera out of the opera house and performing it in settings that can enhance the work, illuminate the music and refreshen the form.

Give credit then to Chicago Opera Theater for programming acuity and staging creativity. The company’s final production of this virtual pandemic season gifted audiences with the Chicago premiere of Daniel Catán’s La hija de Rappaccini, presented Saturday night in a live-streamed performance from the Field Museum.

Catán’s 1991 opera launched his career, leading to his Florencia en el Amazonas five years later, a work that has achieved huge success and multiple productions around the work. (Florencia is scheduled for Lyric Opera’s 2021-22 season.) Sadly, just as Catán’s career began to peak, the Mexican composer died suddenly in 2011 while working on the premiere of his opera, Il Postino.

La hija de Rappaccini (libretto by Juan Tovar) is an adaptation of Octavio Paz’s play of the same name, which is itself a dramatization of Nathaniel Hawthorne’s short story, Rappaccini’s Daughter. Hawthorne’s typically strange tale tells of Giovanni, a university student in Padua, Italy, who is smitten by the beauty of Beatriz, a young woman he sees in the magnificent garden underneath his window. He is fascinated yet unnerved by the mysterious girl, who seems as otherworldly as the plants and flowers in the garden, which are tended by her scientist father, Rappaccini. Giovanni’s friend Dr. Baglioni tells him about Rappacini’s sordid reputation and warns him about becoming involved with his daughter. Yet after meeting her, Giovanni becomes obsessed, even as he witnesses a rose immediately wilt under the girl’s touch. Ultimately, Giovanni realizes that, just like the lethal towering purple plant in the garden, Beatriz is poisonous and the mere touch of her hand would prove fatal to him. Dr. Baglioni provides Giovanni with an antidote to cure Beatriz. Giovanni angrily confronts her but the girl is innocent of her danger to others. Devastated by Giovanni’s angry accusations, she quickly drinks the remedy, which kills her instead of curing her.

Written in 1844, Hawthorne’s fable touches on many themes: the limits of inhumane science, romantic obsession, and love that can destroy as much as it heals. But the topic of innocent human contact that can lead to death could hardly be more of the present era. Rappaccini’s creation of plants and humans with transmittable poison was intentional. But the fact that dubious gain of function research—a story still largely underreported—may have unwittingly led to the present Covid-19 pandemic and a worldwide death toll of over 3 million people is more terrifying than any fiction.

Narrative timeliness apart, it is easy to see why La hija de Rappaccini quickly launched Catán’s career. The composer is a natural at opera, and the two-act, 100-minute work—performed here without intermission— showcases his grateful writing for voices in a conversational way that expands naturally into high-flying solo arias, an extended duet for Giovanni and Beatriz, and a dramatic final trio.

COT’s production went off without a hitch Saturday night—a remarkable achievement considering the ever-present technological pitfalls as well as the logistical complexities of a live opera relay from a museum space. Kudos to stage director Crystal Manich for natural movements, technical director Joseph Staffa for seamless transitions between different museum areas, and the entire video production team at Valhalla Media.

Daniel Montenegro made a terrific COT debut as the protagonist Giovanni. The American tenor registered every aspect of his character throughout the unfolding narrative—from initial intrigue to romantic obsession, fear, anger and tragic acceptance. Montenegro sang with a flexible, warm and ingratiating tone, his middle-weight tenor soaring in the Puccini-like lyricism of his Act 2 aria.

In the challenging title role, Megan Pachecano was largely impressive in her company bow as Beatriz. Technically, the young soprano delivered the vocal goods of the ill-fated character, singing Catán’s long lines with agility and clear, crystalline tone.

Dramatically, the young singer conveyed the earnest girlish quality of Beatriz. Lacking in her performance, however, was the haunted girl’s loneliness, mystery and innate sadness in knowing that she is as poisonous as her father’s plants. Still, Pachecano managed to plumb the requisite expressive depth of Beatriz’s final aria in affecting fashion.

As Rappaccini, Levi Hernandez was successful across the board. The Texas-born baritone encompassed the vocal demands of the role—including some aptly unsettling high notes as Rappaccini nurtures his poisonous plants—as well as the creepy mad botanist’s weird experiments and malign plans for his daughter and Giovanni.

Curtis Bannister seemed miscast as Dr. Baglioni, looking the same age as Giovanni and hardly reflecting a middle-aged, sympathetic friend of his father. Recompense was had in the tenor’s magnificent voice and singing, which moved this comprimario part to centerstage in his every scene.

With atmospheric lighting by Sarah Riffle, Emily Boyd’s spare sets, flowers and plants effectively set the scene with minimal means for Giovanni’s apartment and Rappaccini’s garden, the latter located in the Main Hall of the museum. The venue’s imposing hall columns stood in nicely for Padua’s street exteriors.

As is his style, Catán scored his opera for a large orchestra, one that would have been impossible for budgetary as well as logistical reasons. COT utilized the composer’s own chamber reduction and while much of Catán’s sonic sumptuousness was inevitably sacrificed, the offbeat quintet (two pianos, harp, timpani, and percussion) provided its own eerie and effective textures.

In the early going Saturday night, the balancing—and/or audio mix—seemed to favor the timpani at the expense of the other players. That apart, young conductor Enrico Lopez-Yañez in his COT debut led a flowing and sensitive performance that provided supreme advocacy for Catán’s score. Especially noteworthy was the superb playing of pianists Yasuko Oura and Patrick Godon.

The only dubious element of the evening was the inescapable “land acknowledgement” that has been preceding COT stage performances in various forms over the past two years (as well as at events by other Chicago presenters).

Saturday night it was an on-screen text rather than a verbal announcement: “This production is live-streamed from The Field Museum, which acknowledges that it resides on the traditional homelands of the Three Fires Confederacy: Ojibwe, Odawa, and Potawatomi, and also the Ho-Chunk, Miami, Inoka, Menominee, and many others. The Museum recognizes and is grateful for the Original Peoples who laid the foundation for the City of Chicago, and for the diverse Indigenous nations that reside in Chicago today.” The announcement also encourages clicking on a link that takes one to a political organization with an official government-sounding name and logo.

Asked about the reason for the announcements, a COT spokeswoman said the statement is “a simple sign of respect and gratitude to the Indigenous peoples on whose traditional homelands we perform these works.” She added that the pre-performance comments “originated as part of COT’s ongoing commitment to growth as an anti-racist organization.”

In the current hyper-politicized culture, some will see such an obligatory apologia before every performance as another example of wokeness run amuck, while others may view it more benignly.

Still, laying a guilt trip on audience members as quasi-occupiers before the virtual curtain even goes up doesn’t seem like the best way to make them receptive for the performance that is to follow.