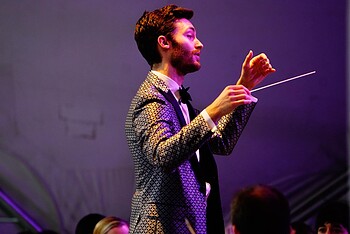 The Deer Valley Music Festival at the Snow Park Outdoor Amphitheater in Park City always plays host to memorable experiences and this weekend’s The Magical Music of Harry Potter with the Utah Symphony is a perfect example. The audience was greeted by ushers in house colors and could be overheard quoting Molly Weasley or Albus Dumbledore, but it was clear from the moment that conductor Enrico Lopez-Yanez took the stage in hooded wizard’s robes that the people on-stage would enjoy the concert as much as those in the audience. I have been a fan of the series for twenty years and came in my Slytherin colors to enjoy the music of John Williams, Patrick Doyle, Nicholas Hooper, and Alexandre Desplat.

The selections for the program were taken from all of the movies and Lopez-Yanez drew the audience in not only with the shared memory of enjoying the films, but by narrating various aspects of the wizarding world. The concert began with the unforgettable “Hedwig’s Theme” by Williams, but later commentary on the magical creatures led to rousing performances of “Buckbeak’s Flight” from Harry Potter and the Prisoner of Azkabanas well as “Fawkes the Phoenix” from Harry Potter and the Chamber of Secrets. The intermission was followed by an abbreviated and much safer Tri-Wizard Tournament and saw a variety of Hogwarts students from the audience conducting music from Harry Potter and the Goblet of Fire before casting spells on cue.

The orchestra was vital to the enchantment of the program. The flutes were frequently called upon for more intricate melodies in certain movements of the suites performed and Concertmaster Madeline Adkins performed dancing passages that were reminiscent of fiddle tunes. The percussionists were tasked with the frenetic and quirky rhythms of “The Knight Bus” racing through London, but were also the heartbeat behind Desplat’s heart-rending “Courtyard Apocalypse” from the Battle of Hogwarts. While the music was drawn from the same series of movies, the styles of each composer were demanding of the sections of the orchestra in different ways and it was an emotional journey to enjoy soulful moments such as “Bridge to the Past” as well as the “Weasley Stomp” by Hooper.

The night’s guest conductor was accompanied by “fellow alumni” in the form of soprano Julia Bradshaw, alto Mariah Stanelle, tenor Mitchell Mosley,and baritone Tate Forshay. This delightful quartet performed the “Double Trouble” chorus from Harry Potter and the Prisoner of Azkaban with an air of both foreboding and cunning while simultaneously blending their voices into the close harmonies of Williams’ rendition of a passage from William Shakespeare‘s Macbeth.The counterpoint of the comic quartet and the dramatic music was a wonderful way to close out the first half of the program.

This was a one-night event, but there are many more to come in this year’s Deer Valley Music Festival as well as the upcoming Forever Mighty Tour that will be bringing the symphony to venues across the state starting on August 4. The Magical Music of Harry Potter is safely stored in the Pensieve, but hurry to get tickets for any of the entrancing performances of the Utah Symphony.