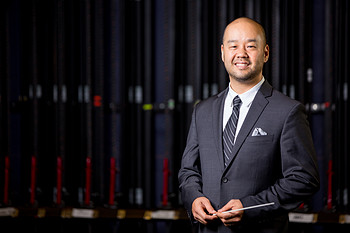 The composer Michael Torke made a big splash in the 1980s with a series of orchestral piece with colors as titles. Each was loaded with brash orchestral effects, exuberant rhythm and mirth. Those pieces launched a career that has seen him become a major figure in American music.

Composed in 1994, “Javelin” is best in full textures when Torke spins darting strings against swirling woodwinds while the brass and percussion make Berlioz-like interjections. A lot of those moments occur so the piece percolates by with a gee-whiz feeling of wonder and myrrh.

But the music almost feels like a student work at times, less assured than the color pieces. The main theme has the sweep and chugging accompaniment of a John Williams tune — not necessarily a bad thing — but doesn’t quite cover its tracks.

Other sections show the long shadow of Stravinsky in disruptive accents and textures but without the endless cleverness of his use of the bass range to skewer traditional harmonies.

Loh’s interpretation was spot-on, rich in details. The brass glowed and the percussion section was a color wheel of shimmering vibraphone, crisp cymbals and dynamic timpani and bass drum.

But the woodwinds and strings were the real stars, busy but tightly cohesive and vibrant.

Pianist Jon Nakamatsu returned for a scintillating performance of the warhorse Piano Concerto No. 1 in B-flat Minor by Tchaikovsky.

Nakamatsu’s draws a startling range of sound and color from the piano. The slow movement had moments where the upper tones had a flute-like shimmer. The broad melodies of the opening movement shifted between dark-hued in dramatic sweeping lines to an autumnal warmth in the second theme.

The finale sounded more flinty in its fierce dance.

He has all the technical skills that one expects from a winner of the Van Cliburn International Piano Competetion, and he employed them judiciously. The enormous virtuoso passages in the outer movements flew by with clarity and purpose.

But it is never virtuosity of an empty quality, phrases were shaped with mastery and nothing felt disconnected.

Loh proved to be a sympathetic accompanist. The orchestra was tightly coordinated with the piano and he shaped an intelligent balance between the massed sounds of the orchestra and the volume of the piano.

The woodwind and horn solos in the slow movement were lovely.

The audience awarded Nakamatsu an extended ovation. He responded with an encore of Scott Joplin’s rag, “The Entertainer.”

Loh led a compelling and thrilling account of Rakhmaninov’s Symphonic Dances, Op. 45 to close the program.

The waltz of the second movement was alternately snarling in muted brass and dolorous in its arching woodwind figures against long, searching melodies in the strings.

The finale sounded zestful and fierce. The closing bars were arresting in their bite and brilliance.

The orchestra introduced two new principal players. Hornist Valerie Sly takes over from long-time principal Marsha Palmer, who has moved to third horn. Carson McTeer, professor of tuba at West Virginia University fills the tuba position that has been in flux over the last several years.